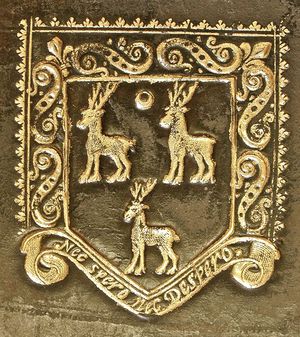 Born in Rotherham, Yorkshire, son of Richard Watts of Barnes Hall. BA Lincoln College, Oxford 1611, fellow 1611, MA 1614, BD 1623, DD 1642. Rector of Willingdale Doe, Essex 1621, from which he was ejected sometime before 1646. He was given leave of absence from Lincoln in 1653, on account of his age and poverty. Although noted by Wood as a master of the smooth pen, his only publication was an English translation of Bacon’s De augmentis scientiarum, published in 1640 as Of the advancement and proficiencie of learning (STC 1167).

Watts bequeathed to Lincoln College “soe many bookes as cost mee threescore pounds”, to be selected by Thomas Barlow (Bodley’s Librarian), and to each fellow of the College one book. The residue of his estate went to his brother Abraham. Some books were selected by Lincoln, most of which are there today. Examples: numerous in Lincoln College; Cambridge UL Rel.e.63.7.

Watts used four variant armorial binding stamps (three bucks statant a crescent for difference), commonly found on his books, though there are numerous of his books in Lincoln without an armorial. His bindings, with or without the armorial, are often in dark brown calf with green edges, and are recognisably Oxford work. He usually, but not always, inscribed titlepages with his name and the motto Ruit hora. He regularly annotated his books with underlinings and marginal marks, and used the flyleaves for extensive annotations or lists of other books; there are several examples of this in Lincoln College (e.g. Q.8.14, Q.9.19).

Retrieved from ‘https://bookowners.online/index.php?title=Gilbert_Watts&oldid=16649’
Categories:
This page was last modified on 14 August 2020.
Content is available under CC BY-NC 4.0 unless otherwise noted.