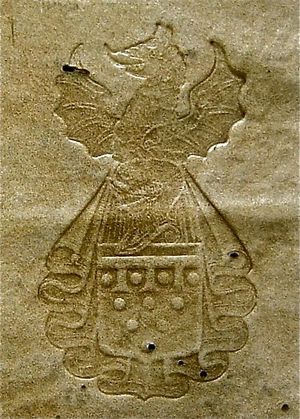 One of the Babington armorial stamps (British Armorial Bindings)

Born in Nottinghamshire, son of Bernard Babington of Puxley. BA Trinity College, Cambridge 1571, junior fellow 1573, MA 1575, DTh 1589; University preacher 1580. Chaplain to Henry Herbert, 2nd Earl of Pembroke 1581, whose patronage led to his appointment as warden of St Giles’s Hospital, Wilton , and to a number of Wiltshire parish benefices. Prebendary of Brecon, and of prebendary of Hereford, 1588; Bishop of Llandaff 1591, of Exeter 1595, of Worcester 1597. Babington stood theologically very much in the mould of late Elizabethan Calvinism, with a firm belief in predestination and preaching, the importance of conformity to the established church, and opposition to recusancy. These qualities were evident in his diocesan administration, where he was active as a preacher, in his contributions to the Hampton Court Conference in 1604, and in his numerous biblical expositions and sermons published from 1583 onwards.

Babington apparently left no will but his son John gave some or all his books to Worcester Cathedral Library shortly after his death. A deed of covenant was signed between the Dean and Chapter and John Babington in 1611, for £100, to guarantee the future safe keeping of the books, and 2s was paid for making a catalogue (which has not survived). Many books from this gift can be identified today, although the original total is likely to have been more; their content is largely focused around theology, patristics and 16th -century biblical commentaries. Examples: numerous at Worcester Cathedral Library.

Babington sometimes inscribed his titlepages with his name. A proportion of the books at Worcester are bound in parchment, gilt-tooled with one of two Babington armorial stamps.

Retrieved from ‘https://bookowners.online/index.php?title=Gervase_Babington_1549/50-1610&oldid=19571’
Categories:
This page was last modified on 30 April 2021.
Content is available under CC BY-NC 4.0 unless otherwise noted.