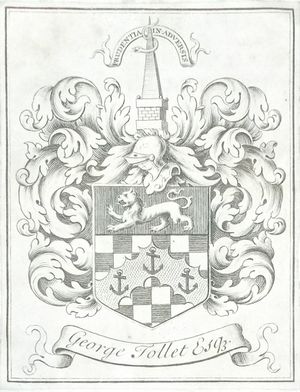 Tollet's origins and parentage are not known, but he began life in Ireland, where he was a founder member of the Dublin Philosophical Society in 1683, as well as a teacher of mathematics; he is known to have trained one of his daughters to have been scientifically proficient. In 1688 he moved to England and held various administrative posts, including that of accountant-general of Ireland, and secretary of the excise. In 1702 he became a commissioner of the Navy, and moved to live in the Tower of London. He was acquainted with both Samuel Pepys and John Evelyn. In 1718 he retired to Betley, Staffordshire.

Tollet used an engraved armorial bookplate, which exists printed in red as well as black (Franks 29548-9). The extent and disposition of his library are not known.

Retrieved from ‘https://bookowners.online/index.php?title=George_Tollet_d.1719&oldid=23336’
Categories:
This page was last modified on 26 August 2022.
Content is available under CC BY-NC 4.0 unless otherwise noted.