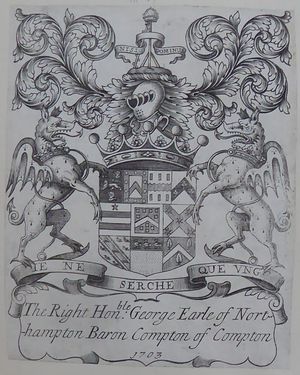 Son of James Compton, 3rd Earl of Northampton, and his second wife Mary Campden; he inherited the title and family estates from his father in 1681. MA Christ Church, Oxford 1681; he was Lord Lieutenant of Warwickshire 1686-7, and Constable of the Tower of London 1712-15.

Compton used two engraved armorial bookplates, in different sizes, dated 1703 (Franks *89, 6562/*48/*63). The extent of his library is not known; his will mentions plate, jewels, pictures, coaches and furniture, but not books, which would have been part of the "household goods" which were left to his wife for her lifetime; the title and main estates were inherited by his son James, who became the 5th Earl.

Retrieved from ‘https://bookowners.online/index.php?title=George_Compton_1664-1727&oldid=19762’
Categories:
This page was last modified on 5 May 2021.
Content is available under CC BY-NC 4.0 unless otherwise noted.