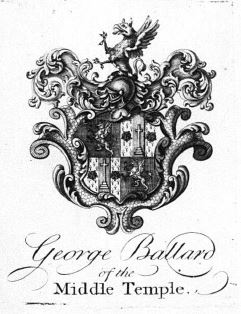 Born in or near Broad Street, London, son of Richard Ballard, merchant. Admitted at the Middle Temple 1689; it is not known whether he pursued a primarily legal or mercantile career, but by 1733 he had bought an estate at Alderstead, near Merstham, Surrey.

Ballard used an engraved armorial bookplate (Franks 1329). the extent and disposition of his library is not known; his will has no specific mention of books, but is concerned with disposing of various properties around his wife and children.

Retrieved from ‘https://bookowners.online/index.php?title=George_Ballard_ca.1671-1750%3F&oldid=19590’
Categories:
This page was last modified on 30 April 2021.
Content is available under CC BY-NC 4.0 unless otherwise noted.