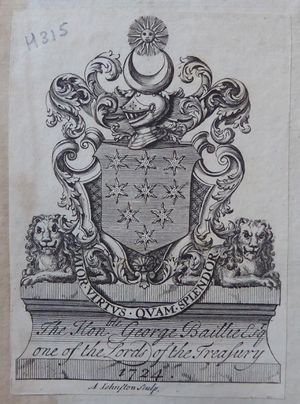 The larger of Baillie's bookplates (all images here from a copy of G. Savile, Miscellanies, 1700, private collection)

Born at Jerviswood Tower, Lanarkshire, son of Robert Baillie, a Scots landowner who was executed in 1684 for involvement in the Rye House Plot. He then fled Scotland but returned with William of Orange's forces in 1689, when he was restored to his estates and began a career of gradual political rise through a series of positions in Scottish administration. He was MP for Berwickshire 1708-34 and became a Lord of the Admiralty in 1714, and a member of the Treasury Board 1717-25. He was noted for his presbyterian piety and was buried at Mellerstain where he began building in 1725 the grand house which became the family seat through succeeding generations.

Baillie assembled a significant library; we do not know the full extent and contents but many books remain today at Mellerstain House, and others are widely dispersed around the world. He used two engraved armorial bookplates of different sizes, but very similar design, dated 1724 (Franks 1162-3).

One of Baillie's spines, decorated with the heraldic badge tool

As well as the use of the bookplates, Baillie's books were regularly decorated in their spine compartments with a small gilt heraldic badge tool, of a fleece hanging from a bow of ribbon. He also commonly inscribed his titlepages "George Baillie".

Retrieved from ‘https://bookowners.online/index.php?title=George_Baillie_1664-1738&oldid=19584’
Categories:
This page was last modified on 30 April 2021.
Content is available under CC BY-NC 4.0 unless otherwise noted.