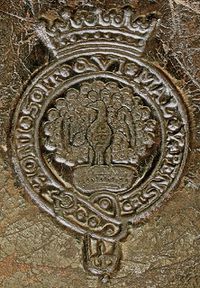 Son of John Manners, 4th Earl of Rutland; he inherited the title and family estates from his elder brother Roger in 1612. Matriculated Christ's College, Cambridge 1595, but did not graduate; he was admitted at the Inner Temple in 1601, after travelling in Europe. Appointed a privy councillor in 1617, he became admiral of the fleet in 1623 and held several court and local administrative positions; his daughter Katherine married the influential courtier George Villiers, Duke of Buckingham, but Manners's advancement was hampered by his being a Roman Catholic.

A number of books with Manners's armorial stamp are recorded in the Armorials Database; the extent and disposition of his library is not known, but he accumulated considerable wealth (his whole estate was valued at just over £20,000 after his death).

Retrieved from ‘https://bookowners.online/index.php?title=Francis_Manners_1578-1632&oldid=22451’
Categories:
This page was last modified on 24 May 2022.
Content is available under CC BY-NC 4.0 unless otherwise noted.