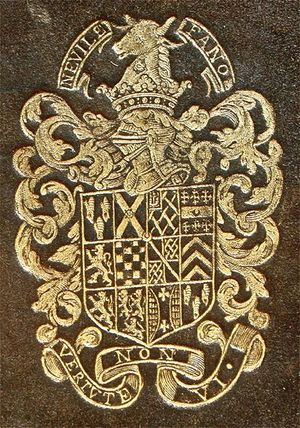 Third (but second surviving) son of Francis Fane, 1st Earl of Westmorland, and brother of Mildmay Fane the 2nd Earl (q.v.). MA St John's College, Cambridge 1631. Made a Knight of the Bath at the coronation of Charles I in 1626. Governor of Doncaster and Lincoln on the royalist side during the Civil War; captured and imprisoned when Lincoln fell to the parliamentary army in 1644. His estate at Fulbeck, Lincolnshire was sequestrated and bought back during the Commonwealth. Became one of the founding fellows of the Royal Society in 1663.

Fane's will has no mention of books; the bulk of his estate, including his goods and chattels, was left to his eldest son Francis. The size of his library is not known but a number of books survive with his armorial binding stamp. Examples: Ushaw College XIX.E.6.18; Exeter Cathedral Nh Sel.

As well as the armorial stamp, Fane's books commonly have his inscription "F Fane" on the titlepage, sometimes with a date and the motto "Ne vile fano".

Retrieved from ‘https://bookowners.online/index.php?title=Francis_Fane_1612-1681&oldid=20724’
Categories:
This page was last modified on 15 August 2021.
Content is available under CC BY-NC 4.0 unless otherwise noted.