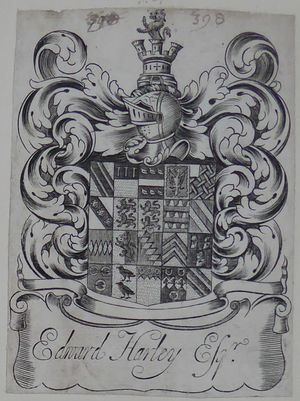 Son of Robert Harley, 1st Earl of Oxford and Mortimer, politician, from whom he inherited the title and family estates in 1724. MA Christ Church, Oxford 1712, DCL 1730; he was elected a fellow of the Royal Society in 1711. He was MP for Radnor 1711-14, and for Cambridgeshire 1722-24. His marriage to Henrietta Cavendish Holles in 1713 brought him not only wealth and estates (Welbeck Abbey, Nottinghamshire and Wimpole Hall, Cambridgeshire, which became their main home) but also books from the Holles family library. He did not follow his father into a life in politics and public affairs, but concentrated his energies on patronage of the arts, and his library.

Harley's father began the assembling of what became one of the most significant private libraries of the first half of the 18th century, and Edward continued that work with vigour; as ODNB observes, "he made the collecting of manuscripts, of books, and of coins, medals and miniatures the consuming passion of his life". He had begun acquiring books as a student, and was increasingly involved in the running and development of his father's library from 1711 onwards. He more than doubled the size of what he inherited, and when he died he owned ca.8000 manuscripts, over 13,000 charters and rolls, ca.50,000 printed books, 41,000 prints and 350,000 pamphlets.

Like his father, he relied on the assistance of Humphrey Wanley as librarian in the development of the library until Wanley's death in 1726; after 1728, the role was filled by William Oldys. Also like the elder Harley, his son made numerous block purchases of whole collections, acquiring manuscripts in this way from John Batteley, John Warburton, John Covel and Conyers Middleton. He was supplied with books by numerous London booksellers (particularly Nathaniel Noel), and also increasingly relied on acquisitions from a wide range of continental European sources. The contents of the library were extremely wide-ranging in subject and language, both for manuscripts and printed books. The Introduction to the edited version of Wanley's Diaries contains a detailed account of the assembling, and content, of the Harleian Library.

The library was divided between Harley's houses at Dover Street, London and Wimpole Hall, where the handsome library room created for Harley still survives (now filled with the books of a later family of owners, the Yorkes; financial difficulties forced Harley to sell Wimpole to Philip Yorke, 1st Earl of Hardwicke, in 1740). The Dover Street house contained 150 presses for books and manuscripts at the time of Harley's death.

After his death, the collections were dispersed. The antiquities, coins, medals and pictures were auctioned in London, beginning 8.3.1742. Harley's widow sold the printed books to the bookseller Thomas Osborne in 1742 for £13,000 (a figure which has often been noted as less than they had cost to bind, let alone buy); after a catalogue was compiled, partly by Samuel Johnson, they were mostly sold 1743-48. The manuscripts were retained by the family until 1753, when they were sold to the nation for £10,000 to form one of the foundation collections of the British Museum, and they now constitute the Harleian Manuscripts in the British Library.

Harley used a series of engraved armorial bookplates (Franks 13790-1, 13799/*398). He commissioned a great deal of high quality bookbinding work, and his bindings have been well studied and documented by Howard Nixon; the term "Harleian Binding", often applied to any 18th century binding using this kind of decorative design, is an unfortunate one, as the style was generic for upmarket British binding work at the time, and is found on countless books which had no connection with Harley. Many of his binders' bills survive, and he had a bindery space at the Dover Street house so that books could be bound onsite.

Retrieved from ‘https://bookowners.online/index.php?title=Edward_Harley_1689-1741&oldid=20336’
Categories:
This page was last modified on 22 June 2021.
Content is available under CC BY-NC 4.0 unless otherwise noted.