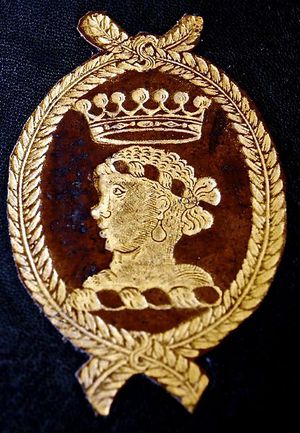 One of the armorial stamps of Edward Conway (British Armorial Bindings)

Son of Edward Conway, 1st Viscount Conway, of Ragley, Warwickshire, from whom he inherited the title and family estates in 1631. Matriculated at Queen's College, Oxford 1611, but did not graduate; his education was continued in the Netherlands, where his father was serving. Knighted in 1618, he was MP for Warwick in 1624, and for other constituencies thereafter. He spent much of the 1630s in London or at his estates in Ireland; during the Civil War he undertook several actions supporting the King, and in the later 1640s was increasingly in financial difficulty, after paying fines. He went to France in the early 1650s and died there.

Conway is noted as a learned man, who (according to Clarendon) "reserved so much of his time for books and study that he was well-versed in the parts of learning". He befriended and patronised numerous authors and his library included many literary works, including poems, plays and romances. He accumulated one of the largest libraries of his generation, and a list of 1643 (when his books were seized) runs to over 5000 volumes; a manuscript catalogue of his library at Lisnegarvey, near Antrim runs to ca.9000 books. This catalogue is now in the Robinson Library, Armagh, where many of his printed books also survive. His library was sequestered by the Long Parliament, but bought back by him in 1647; it descended through his daughter to the Marquis of Hastings and was eventually sold at auction in 1868.

Conway's books are generally identified from the presence of one of three armorial stamps which he used, based on the family crest; his books at the Robinson Library are not usually otherwise marked or inscribed by him.

Retrieved from ‘https://bookowners.online/index.php?title=Edward_Conway_1594-1655&oldid=16834’
Categories:
This page was last modified on 14 August 2020.
Content is available under CC BY-NC 4.0 unless otherwise noted.