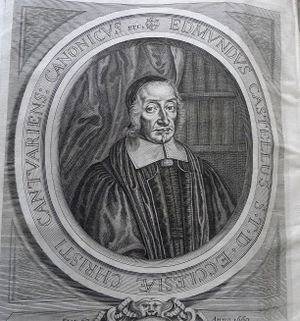 Born at East Hatley, Cambridgeshire, son of Robert Castell, a local landowner. BA Emmanuel College, Cambridge 1625, MA 1628, BD 1635, DD 1660. Vicar of Hatfield Peverel, Essex 1635-38, and probably held other livings between then and 1647, when he became rector of Woodham Walter, Essex. Expertise in Arabic and other oriental languages led to his recruitment in 1653 by Brian Walton as an assistant in the project to produce the polyglot Bible which was printed 1654-57. Its success inspired a plan to go on to create a polyglot lexicon of oriental languages. Castell became the main organizer and editor, and spent much time and money during the succeeding decade bringing it to fruition. It was financially ruinous and when published in 1669 (Lexicon heptaglotton), failed to sell; much of the print run remained unsold by the time of Castell’s death. He was appointed professor of Arabic at Cambridge, and made a canon of Canterbury, in 1667, and elected Fellow of the Royal Society in 1674, but spent most of the last decade or so of his life at Higham Gobion, Bedfordshire, where he had been rector since 1663. Many of his inherited assets were sold during the 1660s to cover the costs of the Lexicon and his later years were ones of straitened resources.

Castell gave detailed directions in his will for the disposal of his books and manuscripts, and “all my trunks and boxes wherein any of my books writings or manuscripts are”. All his Hebrew, Syriac, Samaritan, Ethiopic, Persian and Arabic manuscripts were given to Cambridge University Library; all his printed Hebrew books were given to Emmanuel College; and all his Bibles, including oriental versions, were given to Henry Compton, Bishop of London (there is a separate list of the books to be given to Compton in BL Add MS 22905, fo.99). The books given to Cambridge UL and Emmanuel were to be inscribed to mark the gift. His common law books were given to his grandson Edmund Harris, and his divinity books at Higham Gobion (except the Bibles for Compton) were given to his grandson William Harris. A few specified English books (Raleigh, Heylyn and Culpeper) were given to female relatives. The remaining stock of the Lexicon (ca. 600 copies) was also distributed among hisrelatives in parcels of 100 copies apiece.

The extent to which these bequests were carried out is unclear. Compton (q.v.) received some Bibles, which he subsequently gave to Sion College. There are ca.10 books in Emmanuel with Castell’s inscription, although some accounts suggest that more were originally received. None of the manuscripts intended for Cambridge UL were ever taken in and it seems likely that these were returned to Castell’s executors to help to pay the debts of his estate. It seems likely that the bequests to family members may have been wholly or partly dealt with in the same way, as books in divinity and law were included in the sale of the bulk of Castell’s library, which was held by auction in Cambridge by Edward Millington on 30 June 1686. The sale catalogue includes 1051 lots, divided between Latin theology (279), Oriental books (147), lexicographical books (covering Hebrew, Chaldee, Arabic, Latin and Greek, 75), medicine (100), law (21), miscellaneous Latin books (including history, philology, geography, 205), French, Italian and Spanish books (179) and English books (145). Millington’s annotated copy of the catalogue contains a detailed breakdown of the expenses involved in organizing the sale, buyers’ names, and sale prices; the purchasers were a mixture of London booksellers and Cambridge University members, including many undergraduates as well as college fellows. 80% of the medical books remained unsold. Examples: Cambridge UL H*.12.47, Emmanuel, Cambridge, Wimpole Hall, A de Guevara, Lettere, 1575.

Castell was involved in an attempt to purchase, for Cambridge University, the important collection of several hundred oriental manuscripts assembled by Jacob Golius, professor of Arabic at Leiden 1624-67; this did not come to fruition. The portrait of Castell, prefixed to his Lexicon, shows him standing against a set of curtained bookshelves, presumably representing his study.

Inscription recording a gift from his father Robert Castell.

Retrieved from ‘https://bookowners.online/index.php?title=Edmund_Castell_1606-1686&oldid=22036’
Categories:
This page was last modified on 27 March 2022.
Content is available under CC BY-NC 4.0 unless otherwise noted.