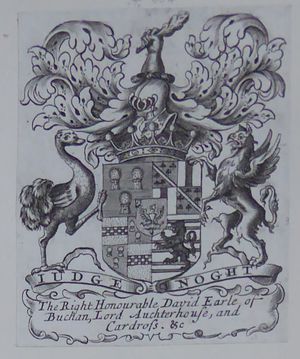 Son of Henry Erskine, 3rd Lord Cardross (1650-1693). He inherited the earldom of Buchan on the death of the 8th earl who died in 1698 without heirs. He held several offices of state under William and Mary but was deprived because of his opposition to the Treaty of Union. Under George I he sat in the British Parliament as one of the House ofLordsRepresentative Peers of Scotland after joining the Duke of Argyll in suppressing the rebellion of 1715.

The plate was re-used by his grandson David Erskine, the 11th Earl of Buchan (Franks 9918 ).

Retrieved from ‘https://bookowners.online/index.php?title=David_Erskine_1672-1745&oldid=18773’
Categories:
This page was last modified on 10 February 2021.
Content is available under CC BY-NC 4.0 unless otherwise noted.