Born at Winchcombe, Gloucestershire, son of John Barkdsale. BA Gloucester Hall, Oxford 1629, MA 1632. Chaplain of Lincoln College, Oxford 1637, and later in the same year Master of the free school at Hereford. Rector of St Nicholas, Hereford and Vicar-Choral of the Cathedral there, 1641, until ejected ca.1646; a royalist supporter, he was initially taken in by the Chandos family at Sudely Castle as a chaplain. He moved to Hawling, Gloucestershire ca.1650, where he is recorded as rector and master of a private school. The published account of a public disputation he held there in 1653 with an independent minister reveals his support for the Anglican tradition. He was appointed rector of Naunton in 1660 and lived there until his death.

Barksdale published a wide range of work from the early 1650s onwards, including sermons, biographies, poems and translations of other writers, particularly Hugo Grotius. He was a great admirer of Grotius and sought to spread awareness of his moderate, ecumenical philosophy on state and church governance as a model for English thinkers. His Memorials of worthy persons (1661-70), chronicling the achievements of moderate theologians, shows the same aim.

In 1671 Barksdale became Librarian of Gloucester Cathedral, a position he held for at least 10 years and for which he received an annual salary of £2; he compiled a catalogue of the Library as it was in 1670 in the donors’ book and gave, or sold, a number of books to the Library himself. He also gave a number of books to the Vicars-Choral Library at Hereford in the 1640s. The size of Barksdale’s personal library is not known but books with his inscription are found in various libraries. Examples: British Library 748.d.19(18), Ames I/538, Ames 7/125; Pembroke, Cambridge 6.13.5; Durham University Library Cosin BB.I.34.

Barksdale’s interest in books is also testified in his poems, published in 1651 as Nympha libesthris. These include not only a poem on the choice of books for a library (“Too many books distract the mind: a dozen/Are worth a hundred, if they be well chosen”), but also a testimonial to the bookbinding skills of the Worcester stationer Francis Ash:

None can compare to you, so finely well/ You bind, that your books for the out-side sell:/ If, by your close art, you will set it forth, / My Cotswold Muse will sell, though nothing worth –/ And though the writers wit give no great flash,/ Readers will think, tis good, cause bound by Ash.

However tongue in cheek this may be, it is unusual to find 17th-century writers giving this degree of attention to members of the book trade. 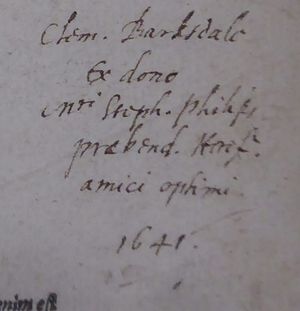 Durham UL Cosin BB.I.34 has Barksdale’s signature at the head of the titlepage, and annotations.

Retrieved from ‘https://bookowners.online/index.php?title=Clement_Barksdale_1609-1687&oldid=22772’
Categories:
This page was last modified on 26 June 2022.
Content is available under CC BY-NC 4.0 unless otherwise noted.