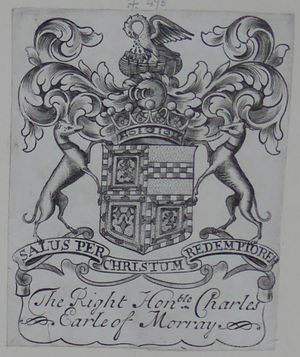 The son of Alexander Stuart, 5th Earl of Moray (1634-1700) and his wife, Emilia Balfour. He was made a baronet in 1681 during his father's lifetime. The family were known to be Jacobites. On his death the earldom passed to his younger brother Francis Stuart.

Retrieved from ‘https://bookowners.online/index.php?title=Charles_Stuart,_ca.1659-1735&oldid=19278’
Categories:
This page was last modified on 5 April 2021.
Content is available under CC BY-NC 4.0 unless otherwise noted.