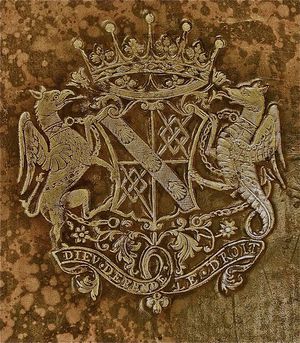 Second son of Robert Spencer, 2nd Earl of Sunderland; he was educated largely through private tutorship but also at the University of Leiden, and became heir to the title when his elder brother died in 1688. In 1695, the year in which he married Arabella Cavendish the daughter of Henry Cavendish, 2nd Duke of Newcastle-upon-Tyne, he became MP for Tiverton, and began a political career which developed into his becoming one of the senior statesmen of his time after he succeeded his father as Earl in 1702, and moved to the House of Lords. As a leading Whig politician, he was variously in and out of office during the following decades; he was Secretary of State in 1706-10, and First Lord of the Treasury 1718-21, but the South Sea Bubble (in which he was heavily involved) led to his political ruin. He had many enemies but has also been admired for his astuteness, shrewdness and intelligence. 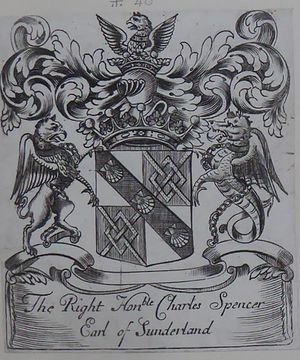 Spencer has long been recognised as one of the leading figures in the evolution of connoisseur book collecting around the turn of the 18th century. He became keenly interested in building a great library of early printed books, and was less interested in manuscripts than the man who is generally seen as his main book-collecting rival, Edward Harley. He began acquiring books in his later teenage years and in 1693 he bought the library of the classical scholar Hadrian Beverland (1650-1716); he purchased a number of other libraries en bloc, or partly so, thereafter, including many books of Sir Charles Scarburgh in 1695. He particularly sought early editions of classical authors, and helped to create interest in collecting incunabula. His books were largely kept at his London home, Sunderland House, where by the time of his death he had over 20,000 volumes spread over more than 5 rooms, but he also kept a significant part of his library at Althorp House. He was noted for his extravagance, and willingness to pay high prices for books, to beat off competition.

Katherine Swift, who studied the Sunderland library in detail, identified 3 phases of its formation: a first to 1711, when most of the books were acquired in London via the trade and auction sales; a second of ca.1711-18, when extensive purchases were made in Holland and France, partly through the agency of Isaac Vaillant; and a final phase from ca.1718, when books were actively sought out from further afield in Europe. A number of booksellers and others were commissioned by, or worked closely with, Spencer to help accumulate the library.

A 3-volume manuscript catalogue of the Sunderland House library was made in 1728, and survives in the John Rylands Library. The books were inherited by Spencer's son Robert, 4th Earl, who sold the manuscripts to King John V of Portugal. The 4th Earl died soon afterwards, in 1729, after which the library was divided between two branches of the family, at Blenheim Palace and Althorp House. The former part was inherited and augmented by the Dukes of Marlborough, and was largely sold at Sotheby's in the 1880s; the latter became part of the Spencer library at Althorp which became the foundation collection of the John Rylands Library in 1892.

Two armorial stamps used by Spencer are recorded in the Armorials Database; he also used an engraved armorial bookplate (Franks *40). His bindings are noted as being more commonly in calfskin than goatskin.

Retrieved from ‘https://bookowners.online/index.php?title=Charles_Spencer_1675-1722&oldid=19623’
Categories:
This page was last modified on 1 May 2021.
Content is available under CC BY-NC 4.0 unless otherwise noted.