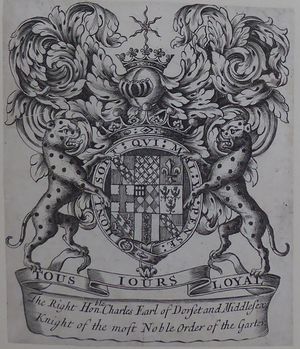 One of the bookplates of Charles Sackville (British Museum, Franks Collection *30)

One of the armorial stamps of Charles Sackville (British Armorial Bindings)

Son of Richard Sackville, 5th Earl of Dorset, from whom he inherited the title and family estates in 1677. MP for East Grinstead 1661-75, when he entered the House of Lords as Earl of Middlesex. Noted as a rake and a hedonist in the 1660s, he developed a wide literary circle, writing verse himself; he was a friend or patron of Matthew Prior and Sir George Etherege. He was appointed Lord Chamberlain in 1689 and was elected a Fellow of the Royal Society in 1699.

Sackville used engraved armorial bookplates made ca.1700, Franks 25914-5/*30-31. A number of books using one of two armorial binding stamps used by him are recorded in the Armorials Database. The extent and disposition of his library is not known.

Retrieved from ‘https://bookowners.online/index.php?title=Charles_Sackville_1643-1706&oldid=23607’
Categories:
This page was last modified on 21 September 2022.
Content is available under CC BY-NC 4.0 unless otherwise noted.