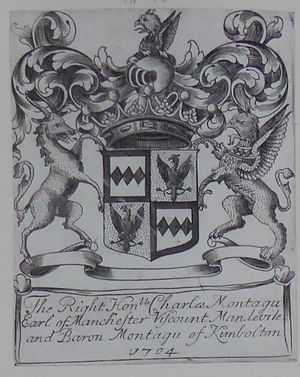 The content and the disposition of his books are not established, but it seems possible they were absorbed into the family library at Kimbolton Castle, Huntingdonshire.

As 'Earl of Manchester Viscount Mandevile and Baron Montagu of Kimbolton' he used an engraved armorial bookplate dated 1704: Franks 20872; *105 (another impression).

A stamp identified in the Armorials database may be his.

Retrieved from ‘https://bookowners.online/index.php?title=Charles_Montagu_ca._1662-1722&oldid=19159’
Categories:
This page was last modified on 28 March 2021.
Content is available under CC BY-NC 4.0 unless otherwise noted.