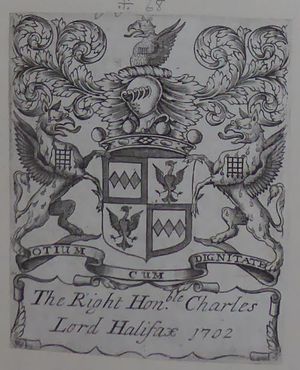 Born at Horton, Northamptonshire, son of George Montagu, MP for Dover. MA Trinity College, Cambridge 1682, fellow 1683. He moved to London where he built a foothold in literary and society circles. MP for Maldon 1689, in which year he also became a clerk to the privy council ; appointed to the Treasury Board 1692, where he became closely involved with the establishment of Bank of England in 1694. Fellow of the Royal Society 1695, and president there 1695-8. First Lord of the Treasury, and High Steward of Cambridge University 1697. Created Baron Halifax 1700. He was actively involved in politics and diplomacy through Queen Anne’s reign and in 1714 he was named one of the regents appointed to govern the kingdom until George I's arrival, appointed to the Privy Council and the Order of the Garter , and created Earl of Halifax.

Montagu was known as a literary man with antiquarian interests, and he was a patron of various writers, as well as being a friend of Isaac Newton (who he first met at Trinity). He had a sizeable library, described by William Nicolson in 1705 as "a gallery nobly furnished with curious books placed under statues as in Cotton's. His Lordship has transcripts of all the rolls of Parliament, journals of the Lords and Commons etc, and has interleaved Thuanus's catalogue for shewing the rarities and defects of his own collection". The library was inherited, along with the bulk of his estate, by his nephew George Montagu, who became 2nd Baron Halifax. After his death in 1739, The "entire and valuable library of ... Charles earl of Hallifax" was sold by auction in London, beginning 11 March 1740. Examples: British Library MSS Harl. 5746, 6201; Senate House Library G.L.1691.

Retrieved from ‘https://bookowners.online/index.php?title=Charles_Montagu_1661-1715&oldid=19160’
Categories:
This page was last modified on 28 March 2021.
Content is available under CC BY-NC 4.0 unless otherwise noted.