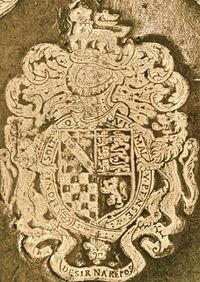 Son of William Howard, 1st Baron Howard of Effingham. He was involved in naval action during his father's expeditions as Lord Admiral in the 1550s and was sent on diplomatic missions to France. Marrying Elizabeth I's cousin Katherine Carey in 1563, he became a rising courtier in the 1560s, and began his own career as a naval officer in the 1570s, and was appointed Lord Admiral in 1585. He was therefore closely involved, though not without controversy, in the events around the Spanish Armada in 1687, and also in the attack on Cadiz in 1596. He was created Earl of Nottingham in 1597.

Howard responded to Thomas Bodley's appeal for books, and gave 16 manuscripts and 36 printed books to the Bodleian Library in 1604. The Armorials Database records one book stamped with Howard's arms; the extent and disposition of his library is not known, but it is likely that he will have had more books of the kind to help display his wealth and status.

Retrieved from ‘https://bookowners.online/index.php?title=Charles_Howard_1536-1624&oldid=21218’
Categories:
This page was last modified on 28 November 2021.
Content is available under CC BY-NC 4.0 unless otherwise noted.