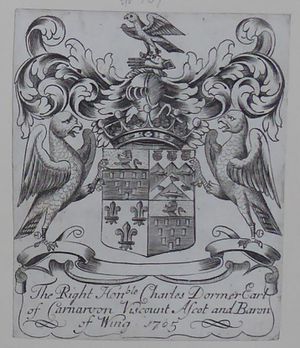 Son of Robert Dormer, 1st Earl of Carnarvon; he inherited the title and family estates when his father was killed in the Battle of Newbury in 1643. Noted more for his hospitality and conviviality than for involvement in state affairs, he was a supporter and confidant of Queen Anne.

Dormer used an engraved armorial bookplate, dated 1705; the extent and disposition of his library is not known. His second wife Mary Dormer also used a bookplate.

Retrieved from ‘https://bookowners.online/index.php?title=Charles_Dormer_1632-1709&oldid=20581’
Categories:
This page was last modified on 17 July 2021.
Content is available under CC BY-NC 4.0 unless otherwise noted.