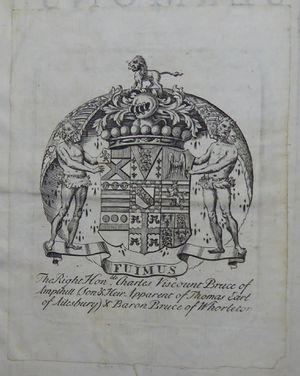 Son of Thomas Bruce, 2nd Earl of Ailesbury, whose ongoing support for James II after 1689 led to his living in exile in Belgium after 1698. Although Charles did not formally inherit the family estates and title until Thomas's death in 1741, he was effectively in charge of these considerable estates from the turn of the 18th century onwards, and was initially much involved in managing and stabilising the family finances. He was an MP 1705-11, and then moved to the House of Lords on assuming one of the family titles as Baron Bruce. He made his principal residence his estate at Savernake, Wiltshire. 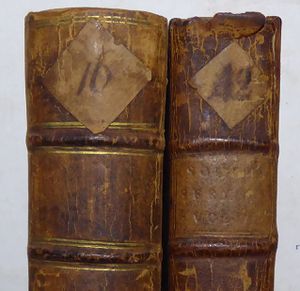 Bruce was noted as an antiquary and bibliophile, and some of his correspondence with Thomas Hearne survives. He used a series of engraved armorial bookplates; two were made for him before his father's death, describing him as Viscount Bruce and heir apparent to Thomas (Franks 4126-7, the latter dated 1712), and one when he had become Earl of Ailesbury (Franks 4129). The extent of his library is not known; he died without a male heir, and his property was variously divided around relatives after his death. An armorial stamp is attributed to him in the Armorials Database, but only one example of its use is cited. 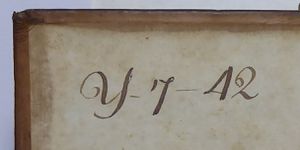 A shelfmark of the kind found in books with Bruce's bookplate (South, as above)

As well as a bookplate, books from Bruce's library will be found to have lozenge-shaped paper labels, with ms numbering, at the heads of the spine, and 18th-century ms pressmarks on their pastedowns, in the form shown here.

Retrieved from ‘https://bookowners.online/index.php?title=Charles_Bruce_1682-1747&oldid=23405’
Categories:
This page was last modified on 4 September 2022.
Content is available under CC BY-NC 4.0 unless otherwise noted.