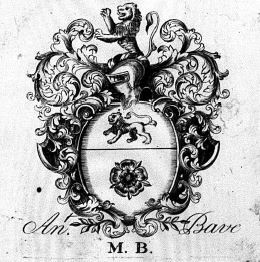 Son of Samuel Bave of Tickenham, Somerset. BA Queen's College, Oxford 1719, MA Emmanuel College, Cambridge 1725. He described himself in his will, and on his bookplate, as a Bachelor of Medicine, though no medical degree seems to be recorded; he practised as a physician in Wotton under Edge, Gloucestershire.

Bave used an engraved armorial bookplate (Franks 1820). The extent of his library is not known; in his brief will, he left all his belongings to his wife Mary.