Atfield's library, together with that of John Cooth (1691), was auctioned in London by Edward Millington, 25 May 1685. The sale contained 2,943 lots, plus 53 tract/pamphlet vols and 65 bundles of pamphlets (of the main lots, 1477 Latin and 1,466 English); the catalogue does not distinguish which books came from which source. his funeral sermon, printed shortly after his death, does not contain any references to his library. 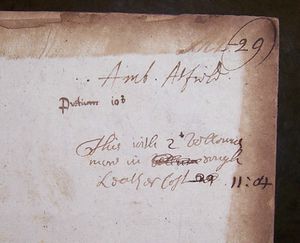 Inscription of Ambrose Atfield (Plume Library. J. Mayor, Many commentaries into one, London, 1647)

A book in the Plume Library has Atfield's name on the flyleaf, and a note of the purchase price "in rough leather". This book was lot 106 on p.37 of the sale catalogue.

Retrieved from ‘https://bookowners.online/index.php?title=Ambrose_Atfield_d.1684&oldid=19548’
Categories:
This page was last modified on 29 April 2021.
Content is available under CC BY-NC 4.0 unless otherwise noted.