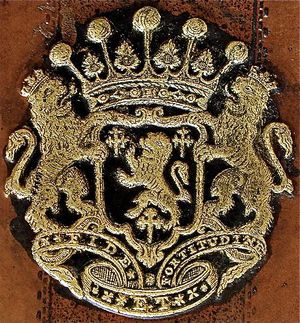 One of the armorial stamps of Algernon Capel (British Armorial Bindings) 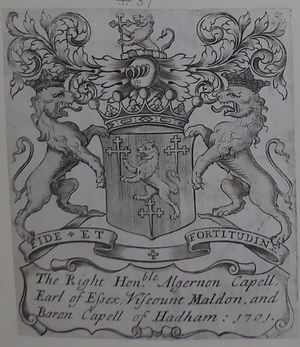 Son of Arthur Capel, 1st Earl of Essex, who died in disgrace as a conspirator. He was a courtier to William and Mary and had a commission as Colonel of the 4th Regiment of Dragoons.

Capel inherited his father's extensive library at the family seat at Cassiobury, near Watford, which he augmented further, though we do not know the extent of the library at the time of his death.

At least one book from his library has been identified in the Foyle Special Collections Library at King's College London: The history of that great and renowned monarchy of China (1655) FOL. DS708 SEM.

Retrieved from ‘https://bookowners.online/index.php?title=Algernon_Capel_1670-1710&oldid=23938’
Categories:
This page was last modified on 29 November 2022.
Content is available under CC BY-NC 4.0 unless otherwise noted.