Alexander ABERCROMBY or ABERCROMBIE of Glassaugh 1678-1728 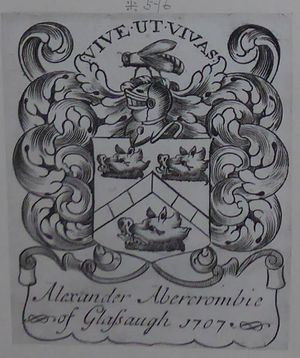 There is a series of bookplates in the Franks collection all incorporating the same coat of arms (argent a chevron gules between three boars' heads erased azure), used by various members of the Abercromby/Abercrombie family. Working out which is which is complex, as different branches of the family evolved during the 17th century, all descended from a 16th-century Alexander Abercromby of Birkenbog, whose first son became Sir Alexander Abercromby of Birkenbog, 1st bart (1603-84), and whose younger son John Abercromby, 1608-91, became the 1st of Glasshaugh. The Glasshaugh estate descended down a male line of Abercrombys (Alexander, 2nd of Glasshaugh, d.ca.1691; Alexander, 3rd of Glasshaugh, 1677-1729).

The baronetcy of the first Sir Alexander of Birkenbog passed down his male line of first surviving sons (Sir James, 2nd bart, ca.1670-1734; Sir Robert, 3rd bart (ca.1698-1787). A younger son of the 1st Sir Alexander, also Alexander Abercromby (d.1753, MP), inherited the estate of Tullibody from his uncle, George (d.1699). There are therefore lines of Abercrombys of Birkenbog, Glasshaugh and Tullibody, many of whom had the same given names, and all used the same coat of arms.

Alexander, 3rd of Glasshaugh, was a Scottish Army officer and politician who sat in the Parliament of Scotland from 1706 to 1707 and in the British House of Commons from 1707 to 1727.

Franks *576 : Abercrombie, Alexander, of Glasshaugh. (Another impression of the last plate.) 1707.

Retrieved from ‘https://bookowners.online/index.php?title=Alexander_Abercromby_1678-1728&oldid=19480’
Categories:
This page was last modified on 25 April 2021.
Content is available under CC BY-NC 4.0 unless otherwise noted.