Born in Great Hallingbury, Essex, son of John Bedwell, yeoman. BA Trinity College, Cambridge 1584/5 and MA 1588. While at Cambridge, Bedwell was introduced to the Arabic language by a group of scholars at Pembroke College, among them Lancelot Andrewes, who would become one of his most important patrons. He was made rector of St Ethelburga, Bishopsgate Street in 1601; was a translator of the King James Bible; and vicar of All Hallows, Tottenham from 1607. Bedwell was a mathematician and scholar of semitic languages, particularly remembered for dedicating his life to the study of Arabic, at a time when printed books and manuscripts in the language were scarce in Northern Europe. He also taught Arabic, his most notable students being Thomas van Erpe and Edward Pococke.

In 1620 Thomas van Erpe listed Bedwell’s personal library as a place where Arabic manuscripts could be accessed in England, alongside the collections of Sir Robert Cotton and the Earl of Arundel. Before his death, Bedwell gave a manuscript Qur’an to Cambridge University Library at the behest of its librarian, his friend and fellow Arabist Abraham Wheelock. In his will Bedwell bequeathed his Arabic books and manuscripts to William Laud, and to Trinity College, Cambridge, although it is unclear whether the latter bequest was ever made. He also bequeathed his multi-volume Arabic dictionary to Cambridge University Library. A small number of valuable bibles were left to his sons-in-law, and other items from his library were sold from a shop in Little Britain (including astrological books that were purchased by William Lilly). Examples: Cambridge UL HH.5.1; Bodleian MS Laud Or. 172; BL C.112.f.11. 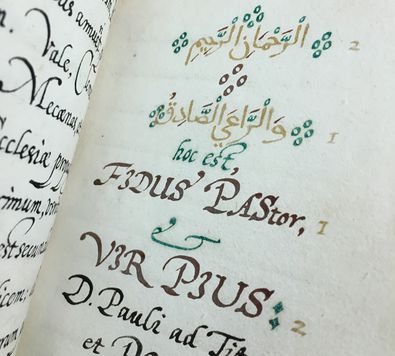 Bedwell commonly inscribed his name in his printed books, although his manuscripts are usually only identifiable through marginalia in his hand. He occasionally wrote his name in Arabic characters. Some of his books are interleaved and heavily annotated. Many manuscripts composed by Bedwell himself are notable for their formal title pages and use of decorative ornaments and coloured inks.

Retrieved from ‘https://bookowners.online/index.php?title=William_Bedwell_ca.1563-1632&oldid=22257’
Categories:
Content is available under CC BY-NC 4.0 unless otherwise noted.