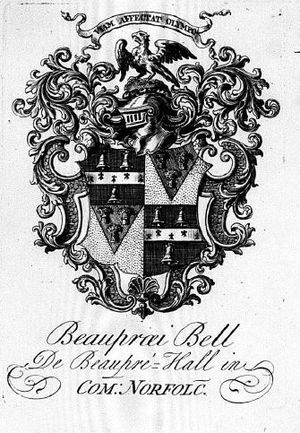 Son of Beaupré Bell of Beaupré Hall, Norfolk, a member of a long-established gentry family there. BA Trinity College, Cambridge 1725, MA 1729. He became a keen antiquary, with particular interests in numismatics; a planned publication on Roman coins was never completed. His personal network included many other contemporary antiquaries, and he is known to have helped both Francis Blomefield and Thomas Hearne with their books.

Bell acquired a significant library to support his interests; he left most of it, together with a monetary bequest and a collection of coins, to Trinity College, where ca.450 books remain today, together with some manuscript collections. The money was immediately used by the College to buy additional numismatic books. He also gave books to the Spalding Gentleman's Society, of which he was an active member (a hand-coloured bookplate affixed to one of these is reproduced by Blatchly).

Retrieved from ‘https://bookowners.online/index.php?title=Beaupre_Bell_1704-1741&oldid=19769’
Categories:
This page was last modified on 30 June 2022.
Content is available under CC BY-NC 4.0 unless otherwise noted.