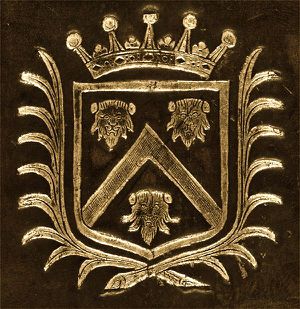 One of the Wentworth's armorial stamps (British Armorial Bindings)

Born at Wentworth Woodhouse, son of Thomas Wentworth, 1st Earl of Strafford. Matriculated at Christ Church, Oxford and studied at Trinity College, Dublin while his father was in Ireland; after his execution, he fled abroad for some years, returning to England in 1652. In 1662, the Strafford title was restored and he had some involvement in political affairs, although he was never a prominent figure. He was elected a Fellow of the Royal Society in 1662, but expelled in 1685.

The Armorials database records 6 different stamps associated with the 2nd Earl; the extent and disposition of his library is not known, but later inscriptions in a number of those books suggest that many of them stayed within the family for some generations (later the Earls Fitzwilliam).

Retrieved from ‘https://bookowners.online/index.php?title=William_Wentworth&oldid=13798’
Categories:
This page was last modified on 22 July 2020.
Content is available under CC BY-NC 4.0 unless otherwise noted.