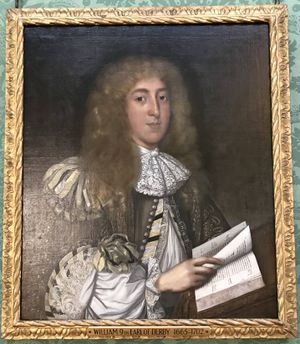 Son of Charles Stanley, 8th Earl of Derby, from whom he inherited the titles and family estates in 1672. He was educated locally and by travelling in Europe in 1673-75. He held various local administrative offices though a mixture of political spats and cautious positioning meant that he was not appointed to all the offices which traditionally attached to the Derby earldom.

The Stanley family library at Knowsley Hall was built up over many generations, and although many books were dispersed through sales at Christie's in 1953-54, a number remain there today which were acquired during the time of 17th-century family members. The 9th Earl is listed in Edward Bernard's Catalogi manuscriptorum (1697) as owning a small number of manuscripts, and Peter Beal identifies Stanley in his In Praise of Scribes as the only known owner of a book sold by the infamous Robert Julian. A portrait of him now at Knowsley Hall shows him holding a book, a pose which is common for scholars and clergymen, but less so for aristocrats. His library was auctioned in Liverpool, 9.6.1707; the sale catalogue (which states that "most" of the books came from Stanley) contains 2035 lots, divided between Latin and Greek theology (221 lots), Latin miscellaneous (219), law (67), English divinity (632), and English miscellaneous (896). We do not know whether these were books which represented a part of the Earl's whole library, perhaps stored at one particular house, or came from multiple locations.

Retrieved from ‘https://bookowners.online/index.php?title=William_Stanley&oldid=21631’
Categories:
This page was last modified on 2 February 2022.
Content is available under CC BY-NC 4.0 unless otherwise noted.