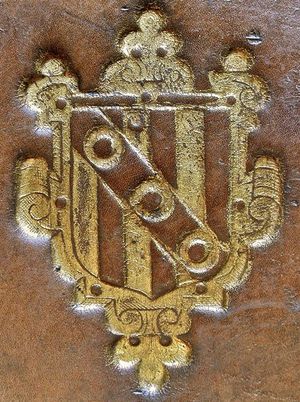 Son of Robert Sanderson, of Saxby, Lincolnshire. BA Broadgates Hall, Oxford 1591, called to the Bar at Lincoln's Inn 1598, where he became a bencher in 1617 and was treasurer in 1628 and 1633. Little can be traced of his career which was presumably mainly as a London barrister, with a family estate at Gainsborough, Lincolnshire.

Sanderson's lengthy and rather rambling will contains numerous references to books, and the statement that "I account my greatest wealth to consist in my books of all sorts". The bulk of his library was left to his son Caspar, who was charged "not to give or sell them away because I have in most of them taken pains with my own hand and pen for his ease and instruction". He was also directed to revise and publish Sanderson's manuscripts and translations, particularly on Proverbs and Ecclesiastes, which "for that intent [i.e. publication] I finished after many years study". He also left numerous specific bequests of books: to the Library of Lincoln's Inn, the "large Latin concordance" in his study there, and Philippe de Mornay's Mysterium inquitatis; to his wife, "her Bible which is lately bound with silver clasps"; to his son Robert "my old Bible bound in vellum which was his mother's", and a folio Latin Bible with the notes of Tremellius; to his daughter Mildred his quarto Bible bound in carnation velvet; to his daughter Lucy a folio Cambridge Bible, and all the books on his study by Nicholas Byfield, "that reverend divine"; to his "ancient friend" Lady Lucy Francis his book of common prayer with silver clasps, and "all the books in my chamber or study she shall say are hers". Each of his daughters was also to receive "six prayer books or other books of divinity tending to devotion", and his wife was to have Foxe's Book of martyrs and all his books by Richard Sibbes, during her lifetime, but then to be returned to Caspar. Forty shillings was left to Richard Williams, vicar of Gainsborough, to buy books "provided they be divinity", and to his nephew Sir William Sanderson (1586-1676, historical writer) he left "the frame and fashion of books which now stands in my chamber next my study at Gainsborough to be set up in his garden for a memento of this fading life with this poesie or inscription to be set thereupon, Ut umbra vita". It is not known how long his library was kept together; his son Caspar, who was apparently trained as a lawyer, does not have a traceable career, and none of his manuscript writings appear to have been published.

The armorials database tentatively attributes a binding stamp, known to survive in only one exemplar, to this Sanderson, though it may belong to another member of the family (National Art Library CLE SS2). It is however clear that Sanderson had an extensive library, none of which is currently traced.

Retrieved from ‘https://bookowners.online/index.php?title=Thomas_Sanderson&oldid=16175’
Categories:
This page was last modified on 10 August 2020.
Content is available under CC BY-NC 4.0 unless otherwise noted.