Eldest son of Sir William Twysden, who inherited the baronetcy on his father’s death in 1629, and the family estate at Roydon Hall, Kent, when his mother died in 1638. Educated at Emmanuel College, Cambridge and Gray’s Inn, though he did not graduate or proceed to the bar. MP for Winchelsea in 1625-6 and for Kent in 1640, but fell foul of Parliament during the 1640s when his estates were sequestrated. Devoted much of his life to antiquarian activities; he was a friend and helper of many of the mid-century antiquaries (e.g. Elias Ashmole, Sir Edward Dering, William Dugdale, William Somner) and wrote or edited a number of historical works, principally Historiae Anglicanae scriptores X (1652), containing the first published versions of a number of medieval English chronicles.

An active collector throughout his life, who amassed a significant collection of medieval manuscripts as well as printed books. He was also acknowledged by Thomas Bray as an instigator of the movement to create parish libraries around the country, particularly in poorer livings. He inherited some books from his father and acquired his own from booksellers and from his numerous antiquarian contacts. He documented a wish that his library should become a family heirloom and bequeathed all his books to his eldest son William with a stipulation that they be kept together at Roydon. In 1715 most of the collection was sold by his grandson to Sir Thomas Sebright; this family library was sold in 1807 and Twysden’s books are now dispersed in libraries across the world. W H. Robinson catalogue 71 (1940) contained many Twysden books from the remains of the Sebright library at Beechwood Park, near St Albans. Examples: Bodleian Library Vet.E1.b.13; Cambridge UL SSS.9.3, SSS.46.18; Senate House Library, London. 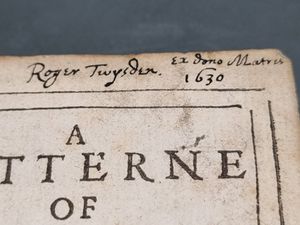 Typically inscribed his books with his name and date of acquisition on the titlepage; also commonly wrote notes on flyleaves and in margins.

Retrieved from ‘https://bookowners.online/index.php?title=Sir_Roger_Twysden&oldid=22418’
Categories:
This page was last modified on 16 May 2022.
Content is available under CC BY-NC 4.0 unless otherwise noted.