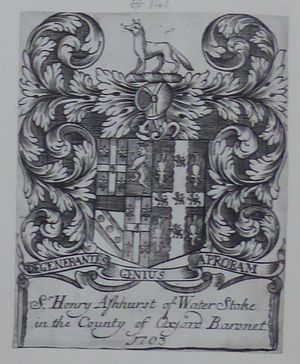 Born in London, son of Henry Ashurst, a London merchant. After an apprenticeship he followed in his father's footsteps and developed a successful mercantile business, trading with the Levant, West Indies and America. MP for Truro 1681 and 1689-95, for Wilton, 1698-1702; alderman of London, 1688-9; created a baronet 1688. His family had a strong puritan tradition and Ashurst was closely connected with, and a patron of, prominent nonconformists. He supported whig politics and was regularly involved in campaigns to extend toleration to dissenters. In 1691 he purchased the manor of Waterstock in Oxfordshire, where he built a fine house, and from the mid 1690s onwards he became increasingly involved in the governance of New England, being appointed agent for Massachusetts (1689-1701), Connecticut (1699-1711) and New Hampshire (1701-2).

Ashurst used an engraved armorial bookplate (Franks 811/*141), though the size and contents of his library are not known. In his will, he left all his books and papers to his son Henry (the 2nd baronet, and his main heir, ca.1670-1732), asking that the manuscripts be kept private "and that he would regard the name and memory of his father who hath endeavoured to deserve it". He also directed that copies of Matthew Henry's Expositions of the Old and New Testaments, Richard Baxter's Call to the unconverted, and Richard Alleine's Vindiciae pietatis be given to his grandchildren, and as part of his local charitable donations he sought to create a fund for "ten pounds a year to buy Bibles for the poor for ever".

None of Ashurst's books have been identified.

Retrieved from ‘https://bookowners.online/index.php?title=Sir_Henry_Ashurst_1645-1711&oldid=19540’
Categories:
This page was last modified on 29 April 2021.
Content is available under CC BY-NC 4.0 unless otherwise noted.