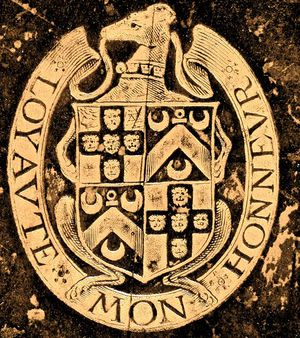 Born at Roobers, Nether Stowey, Somerset; son of Edward Walker (d.1635/6). He entered the service of Thomas Howard, Earl of Arundel in 1633 and in 1635 was appointed Blanch Lyon pursuivant-extraordinary. He was appointed Rouge Dragon pursuivant in 1637 and Chester herald in 1638. He was made Garter King of Arms in 1645. He went to France following Charles' execution, serving Charles II as clerk of the council in ordinary during his exile. He returned to his position as Garter following the Restoration.

Bequeathed some heraldic manuscripts to the College of Arms, together with the books of William Le Neve, but the bulk of his library to his grandson Edward Clopton; it was apparently dispersed soon afterwards.

Books with his armorial stamp survive.

Retrieved from ‘https://bookowners.online/index.php?title=Sir_Edward_Walker&oldid=19900’
Categories:
This page was last modified on 14 May 2021.
Content is available under CC BY-NC 4.0 unless otherwise noted.