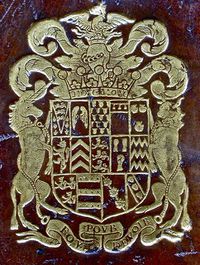 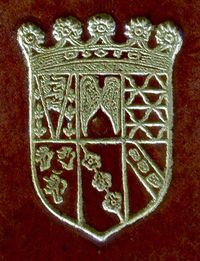 Son of Edward Seymour, Duke of Somerset; his early life was much tied up with state politics, and after his father's execution in 1552 the family estates were confiscated, until restored by Elizabeth I, who made him Earl of Hertford. In 1561 he was imprisoned and disgraced for his secret marriage with Lady Katharine Grey, regaining favour and admission to court only in the 1570s. He held various administrative offices under Elizabeth, and James I, although he was sometimes suspected of family aspirations to the royal succession. Summarised by ODNB as "a quarrelsome man", he is known to have patronised musicians and authors, and had a company of players from the 1580s onwards.

Books with Seymour's armorial stamps and inscription survive, although the extent and disposition of his library is not known.

Retrieved from ‘https://bookowners.online/index.php?title=Sir_Edward_Seymour&oldid=13768’
Categories:
This page was last modified on 22 July 2020.
Content is available under CC BY-NC 4.0 unless otherwise noted.