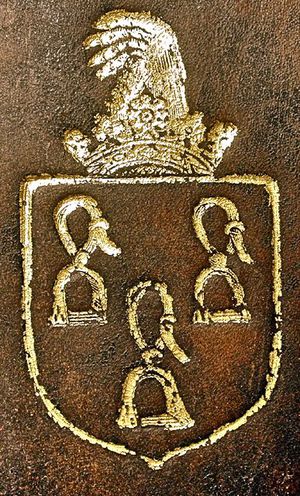 Born at Holme Lacy, Herefordshire, son of Sir James Scudamore. Matriculated at Magdalen College, Oxford 1616, but did not graduate; admitted at the Middle Temple 1617, then travelled in Europe for a year. He returned on the death of his father in 1619, and became active in county administration, and MP for Herefordshire in 1621. He achieved political advancement via the patronage of the Duke of Buckingham, and was made Viscount Scudamore of Sligo, in the Irish peerage, in 1628; he also became a close friend of William Laud, who had a major influence on his spiritual development. During the 1630s he paid for the restoration of Dore church , near his Herefordshire home, creating a model of Laudian high church design; in the 1660s, he donated £100 to the restoration of Hereford Cathedral.

Appointed ambassador to France in 1635, he returned in 1639 after an unhappy period of political wrangling. He was ineffective as a military leader for royalist forces in Hereford and was fined for his estates in 1647, after a period of house arrest in London; his houses in London and Herefordshire were plundered during the War. He spent the rest of his life in relative retirement, cultivating both his estates and his intellectual and spiritual interests. During his time in Paris he became a friend of leading thinkers like Grotius and Sir Kenelm Digby, and in 1648 Samuel Hartlib described him as a great scholar, who studied hard. In the 1650s he engaged Henry Hammond as a private tutor, and he gave much money away around that time to distressed Anglican clergymen.

A small number of books survive with Scudamore's armorial binding stamp, presumably a tiny part of what must once have been a much larger collection. His will has no specific mention of books, beyond a direction that Thomas Martin of Holme Lacy should choose three of his best books there; the bulk of his household property was bequeathed to his grandson, who succeeded him as 2nd Viscount. Examples: CUL SSS.52.5.

CUL SSS.52.5 has the armorial stamp, but no inscriptions/annotations.

Retrieved from ‘https://bookowners.online/index.php?title=John_Scudamore&oldid=21633’
Categories:
This page was last modified on 2 February 2022.
Content is available under CC BY-NC 4.0 unless otherwise noted.