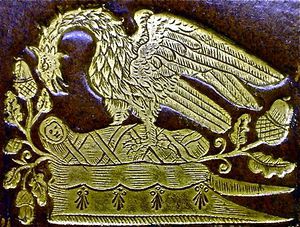 Son of William Stanley, 6th Earl of Derby; he was known as Lord Strange until 1642, when he inherited his father's title. Educated locally and through European travel, he was MP for Liverpool in 1625, and made Lord Lieutenant of Lancashire and Cheshire in 1626. He was much involved in military action in the north-west during the Civil War, on the royalist side, and was in particular dispute with Parliament for refusing to surrender the Isle of Man; his estates were increasingly confiscated as a result. After joining Charles II in his unsuccessful attempt to defeat parliamentary forces in 1651, he was captured and executed.

The Stanley family library at Knowsley Hall was built up over many generations, and although many books were dispersed through sales at Christie's in 1953-54, a number remain there today which were acquired during the time of 17th-century family members. An armorial stamp recorded in the Armorials Database as associated with the 7th Earl may be one of several dating from that time. An armorial stamp incorporating the three-legged device of the Isle of Man illustrated in Maggs catalogue 1272 (1999)/35, may come from the Stanley library on the island ca.1640.

Retrieved from ‘https://bookowners.online/index.php?title=James_Stanley&oldid=15607’
Categories:
This page was last modified on 5 August 2020.
Content is available under CC BY-NC 4.0 unless otherwise noted.