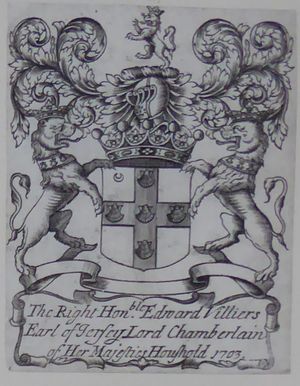 Son of Sir Edward Villiers, knight marshal. Matriculated at St John's College, Cambridge 1671, but did not graduate. He held a series of court appointments during the 1680s and 90s and raised to the peerage as Viscount Villiers in 1691; he was involved in diplomatic missions to Europe in the later 1690s. He became Lord Chamberlain in 1700 but increasingly fell out of favour after the accession of Anne in 1702.

Villiers used an engraved armorial bookplate (Franks *69). He died in debt and his library was sold by retail sale in London, 25.11.1712, as part of a joint sale with the books of Timothy Burrell; no catalogue survives, but the sale was advertised in newspapers.

Retrieved from ‘https://bookowners.online/index.php?title=Edward_Villiers&oldid=13795’
Categories:
This page was last modified on 22 July 2020.
Content is available under CC BY-NC 4.0 unless otherwise noted.