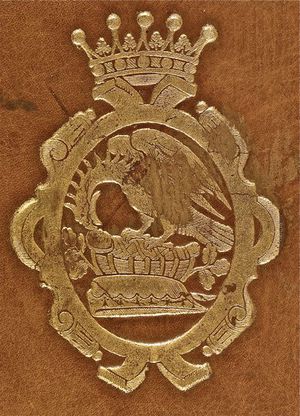 One of the armorial stamps of Charles Stanley (British Armorial Bindings)

Son of James Stanley, 6th Earl of Derby, who was executed in 1651 for his involvement in Charles II's unsuccessful attempt to regain the throne. He spent much of the Interregnum in Cheshire; many of the family's sequestered estates were restored after 1660. He held various local administrative offices, and was mayor of Liverpool in 1666.

The Stanley family library at Knowsley Hall was built up over many generations, and although many books were dispersed through sales at Christie's in 1953-54, a number remain there today which were acquired during the time of 17th-century family members. Two armorial stamps associated with the 8th Earl are recorded in the Armorials Database; one of these is used on several copies of the Earl's published tract, The protestant religion is a sure foundation (1669, reprinted 1671).

Retrieved from ‘https://bookowners.online/index.php?title=Charles_Stanley&oldid=13786’
Categories:
This page was last modified on 22 July 2020.
Content is available under CC BY-NC 4.0 unless otherwise noted.